How to Stop Your Cats from Scratching Furniture

People often liken cats to sociopaths. They certainly like to do things their own way, without care for our feelings. And they definitely don’t respect boundaries- not even the brand-new furniture. Whether you’ve taken your cat to rented accommodation or are about to switch out the old sofa for a new one, chances are you want your cat to leave the furniture well alone.

Why do cats scratch on furniture?

Cats scratch as a signal to other cats. It’s a two-fold message – the physical lines made by the claws, and the pheromones released from the pads during scratching.

Pheromones are a little like scents, but they cause a biochemical reaction (such as hormone release) in the animal sniffing them. They always cause the same reaction, regardless of how often that animal has come into contact with the pheromone before. This is important, as pheromones are one of the things we can use to stop cats from scratching on the furniture. Scratching also maintains strong, sharp claws by removing the dead outer layer.

So why do they scratch on the furniture? Well, cats have a natural urge to scratch something, and they can’t differentiate between your expensive sofa and your expensive scratch post.

They do have scratching preferences though, and these are not always met by scratch posts but usually are by furniture. They need to be able to stretch to their full height, and many scratch posts don’t go higher than a foot or two. They also want whatever they’re scratching on to feel stable – wobbly, poorly built posts don’t allow them to stretch out fully, whilst furniture is usually very stable.

It’s worth pointing out here that cats scratch to signal their territory. So a cat that feels threatened in some way is likely to scratch more than a cat that does not. If your cat has only recently started clawing the furniture, there’s every chance that it’s due to upheaval in their lives – a neighbourhood bully cat is often to blame.

How can I stop my cat from scratching the furniture?

The first thing you need to do is to identify why your cat is scratching. And if that’s because the furniture is what suits their needs best, you need to find a scratch post that’s even better. The best type of scratch post, as identified by research, is at least 3ft tall and covered in rope/sisal.

Cat trees are often good options as they provide more scratching options, but make sure it’s a high-quality cat tree and well-constructed one. All cats are different, however. Some may like a horizontal scratch area (take a look at your sofa- is it the vertical or horizontal surface they’re using?) and some might prefer cardboard rather than rope.

It might be worth investing in a couple of different scratch post options so that your cat can choose. Place the scratch post near the ruined furniture so that it’s obvious to them that there’s a better alternative.

As we mentioned earlier, cats will often increase their rate of scratching if they feel threatened – for instance if there’s a new cat outside. They might also change scratching location in order to make it obvious to the new cat that the territory is taken. If this is the case, helping your cat feel safe in his territory could help your scratching problem.

Provide hiding places for your cat, and try to block the view outside by closing blinds or curtains. You can even use a pheromone diffuser such as Feliway, which replicates the ‘safe space’ pheromone that cats release to mark their territory as familiar and safe.

Ceva, the company that make Feliway, have recently developed FeliScratch, a product designed to help you with your cat’s inappropriate scratching. In their trials they reckon 80% of cats use their scratch post after using the product, many within the first 15 minutes. 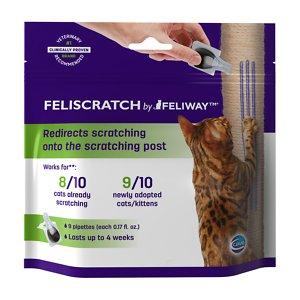 It comes in small pipettes of liquid which you use to draw three ‘scratch’ lines on the post. It’s both coloured- to provide a visual maker of the scratch- and contains the pheromone produced in the cat’s pads, so that they think they’ve used the post before.

It does take a little bit of input- you need to apply it every day for a week and then on and off for the first month- but seems to have lots of happy customers!

Don’t forget to reward your cat with a treat for using the right area! Just like dogs, cats can be trained with positive reward systems.

What about other methods?

Lots of other methods have been suggested for stopping cats from scratching. Some people recommend covering the area with tinfoil, others spraying the cat with water if they scratch the wrong area. The problem with the majority of these methods is they’re not getting to the root of the problem. And lots of them involve punishing the cat, which is going to increase fear and make the cat feel less safe- sometimes causing even more scratching. Nail caps are often suggested.

These are currently thought to be a good temporary measure, but they do need to be applied every few weeks and most cats don’t tolerate them well. Cats with nail caps on should be kept indoors as they’re unable to defend themselves with their nails covered.

On the whole, don’t put too much effort into trying other methods, and make sure that anything you do try isn’t going to be stressful or painful for your cat.

Can I get my cat declawed?

Some people recommend declawing the cat so they can’t do any damage. This operation is called onchyectomy and the nails and final bone of the toe are amputated.

The majority of vets believe this to be unnecessary and actually harmful, and it’s actually illegal in most countries due to the fact it’s a surgical procedure that doesn’t benefit the cat at all.

Studies have shown that these cats feel pain for at least 12 days after the procedure and some cats will have lifelong pain from the operation. There are lots of other proven techniques to help that should be used first.

Did you find this article helpful?

The Idle Cat is using cookies to help give you the best experience. Got it!